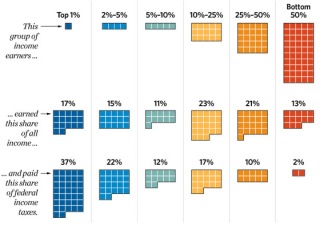 David French includes the above chart in his excellent post on America’s dependency problem. It illustrates the true breakdown of federal income taxes by income level more intuitively than anything I’ve seen in recent memory. Everyone should spread it on their social networks and save a copy to their computers, phones, iPods, Kindles, etc. to keep on hand for sharing with friends who don’t know the facts. Because apparently the RNC and the Romney Campaign – the guys with money and ad space – can’t be bothered to produce something so useful themselves and get it out there…

There’s only so much mileage the Left can get out of vehemently denying that President Barack Obama is a socialist. For best propagandistic results, it’s ideal to highlight people on the Right who allegedly admit the same thing (and if their remarks can be used to embarrass a hated cable news channel in the process, so much the better).

“Last year, candidate Barack Obama stood on a sidewalk in Toledo, Ohio, and first let it slip to Joe the Plumber that he wanted to ‘spread the wealth around.’ At that time, I have to admit that I went on TV on Fox News and publicly engaged in what I guess was some rather mischievous speculation about whether Barack Obama really advocated socialism, a premise that privately I found rather far-fetched.”

That he did—on several occasions.

On Oct. 14, 2008, Sammon said on the air that Obama’s “spread the wealth” remark “is red meat when you’re talking to conservatives and you start talking about spread the wealth around. That is tantamount to socialism.”

On Oct. 21, he told Greta Van Susteren: “I have read Barack Obama’s books pretty carefully, and he in his own words talks about being drawn to Marxists… Now all this stuff’s coming out about whether he’s a socialist. I don’t know why anyone is surprised by it, because if you read his own words and his sort of, you know, orientation coming up as a liberal through college and a young man, it’s not a huge shock.”

Sammon, a former Washington Times reporter, also made sure his troops got out the word. On Oct. 27, he sent an email to staffers highlighting what he described as “Obama’s references to socialism, liberalism, Marxism and Marxists” in his 1995 autobiography, Dreams From My Father.

In an interview, Sammon says his reference to “mischevious speculation” was “my probably inartful way of saying, ‘Can you believe how far this thing has come?’” The socialism question indeed “struck me as a far-fetched idea” in 2008. “I considered it kind of a remarkable notion that we would even be having the conversation.” He doesn’t regret repeatedly raising it on the air because, Sammon says, “it was a main point of discussion on all the channels, in all the media”—and by 2009 he was “astonished by how the needle had moved.”

In defense of Sammon’s ethics, raising a subject on the air and speculating about it, even “mischievously,” aren’t the same as reaching or arguing for a firm conclusion about the subject. Indeed, if you watch the full clip the Oct. 14 quote comes from, Sammon’s not even arguing for the Obama-as-socialist charge—he’s just objectively analyzing 2008 rival John McCain’s strategic interest in pressing the issue.

Read the rest on NewsRealBlog.

Sure, we’re all a little spooked about the huge debt our government is accumulating, but everybody can relax now; our favorite anti-American, far-left propagandist, Michael Moore, has the solution. Admittedly, it’ll take some minor changes in the way we think about wealth, which some of you might like, but you’ll get used to it—after all, you’re not greedy, are you?

Moore recently had this to say about the rich:

“They’re sitting on the money, they’re using it for their own — they’re putting it someplace else with no interest in helping you with your life, with that money. We’ve allowed them to take that. That’s not theirs, that’s a national resource, that’s ours. We all have this — we all benefit from this or we all suffer as a result of not having it,” Michael Moore told Laura Flanders of GRITtv.
“I think we need to go back to taxing these people at the proper rates. They need to — we need to see these jobs as something we some, that we collectively own as Americans and you can’t just steal our jobs and take them someplace else,” Moore concluded.

Much has been made about how Moore himself won’t return his own generous share of this “national resource,” but even if he were more magnanimous, his argument wouldn’t be any less outrageous. For one thing, it ignores the fact that the rich already pay a disproportionately high share of the tax burden individually, and US corporate taxes are among the highest in the world, too. For another, we’ve run this experiment several times in American history, and the verdict is in: if you want to raise government revenue and increase prosperity for all Americans, then the direction you want taxes to go is down, not up. As a businessman, you’d think Moore would understand that when businessmen pursue their own interests, it actually does tend to have the effect of “helping you with your life, with that money,” by creating new jobs for the purpose of creating goods and service that people want.

Read the rest at NewsRealBlog.

Welcome to the official website of conservative writer Calvin Freiburger. Conservative Standards is dedicated to 100% unfettered analysis of what the Right must do to defeat the Left and save America.

The views expressed on Conservative Standards are strictly my own, and do not necessarily reflect those of any other organizations or publications where I have been employed and/or my work has been featured, nor do they necessarily reflect the views of any individuals employed by or otherwise affiliated with such groups.