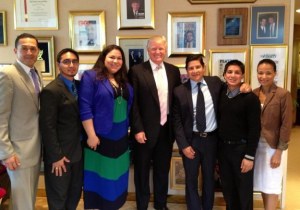 One of the reasons attacks on Donald Trump such as National Review’s recent symposium have been ineffective is because they don’t speak to the factors that could actually change his supporters’ minds. Among Trump fans who read conservative commentary, The Donald’s various political heresies, temperamental deficiencies, and personal failings are already priced into their decision—they aren’t prioritizing a full-spectrum conservative, they just want someone who’ll finally shut the border and get our immigration system under control once and for all, and don’t trust anyone else to do it.

So don’t waste space reiterating what they already know and don’t care about. Instead, focus the bulk of your energy dismantling the only good pro-Trump argument—his perceived strength as an immigration hawk—and publicize the truth that, beyond the tough talk about building walls and deporting rapists, he’s as wobbly and inconsistent on the issue as anyone.

There was certainly no reason to believe Trump was anything special on amnesty before 2015:

But all that’s in the past, you say. Now he gets how serious illegal immigration is. Now he’s tough as nails. Well…

If you think immigration would be uniquely exempt from all of that, think again—which is the message a competent anti-Trump campaign would devote the lion’s share of its energy to hammering home.

Welcome to the official website of conservative writer Calvin Freiburger. Conservative Standards is dedicated to 100% unfettered analysis of what the Right must do to defeat the Left and save America.

The views expressed on Conservative Standards are strictly my own, and do not necessarily reflect those of any other organizations or publications where I have been employed and/or my work has been featured, nor do they necessarily reflect the views of any individuals employed by or otherwise affiliated with such groups.
%d bloggers like this: